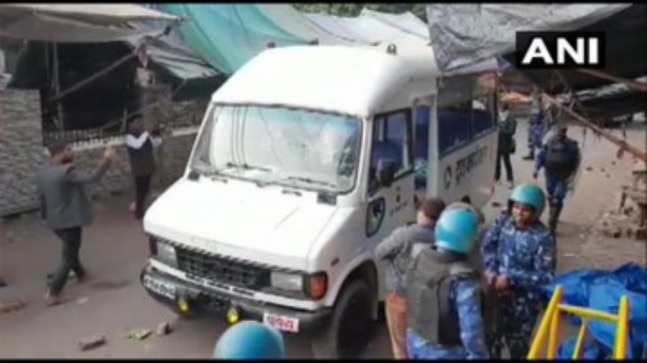 Aligarh District Magistrate Chandrabhushan Singh on Sunday said that women students of the Aligarh Muslim University were responsible for the incident of stone-pelting in the area.

Visuals from the spot

Clashes broke out between anti-CAA protesters and police in the old city area in Aligarh following incidents of arson and stone-pelting on late Sunday afternoon.

Aligarh District Magistrate Chandrabhushan Singh on Sunday said that women students of the Aligarh Muslim University were responsible for the incident of stone-pelting in the area.

“Some women students from Aligarh Muslim University (AMU) are behind this, we are trying to identify them. We are ascertaining the damage caused by rioters and it will be recovered from them. The situation is under control now,” he said.

He also said that the protesters pelted stones at police vehicles and set a transformer ablaze near Jama Masjid.

Police had fired teargas shells to disperse the mob indulging in vandalisation of property and throwing stones at security personnel in upper Kot area of the Kotwali police station, said police sources.

Following the incident, internet services have been snapped in Aligarh till midnight.

According to news agency PTI, the clashes broke out shortly after a Bhim Army-led march by hundreds of anti-CAA protesters heading to the district collectorate earlier were stopped midway by police and Rapid Action Force jawans.

Stopped by police, the protesters, however, had headed towards the Eidgah area in the city where another group of anti-CAA women protestors had been holding an indefinite dharna for the past three weeks.

As the Bhim Army-led protestors, including women, were stopped by police from moving ahead after they crossed over the Katpula Bridge from the old city, they decided to join the women protesters sitting in Eidgah area.

The protesters had taken out the march on a call by Bhim Army chief Chandra Shekhar.

Clashes also broke out between two groups of people near Jaffrabad in northeast Delhi on Sunday evening where a large number of people had gathered to protest against the Citizenship Amendment Act.

Police fired tear gas shells as members of the two groups pelted stones at each other in Maujpur.

Will poor handling of Covid-19 crisis cost Donald Trump his presidency? Here is what Fareed Zakaria has to say

Samsung S20+ vs iPhone 11 Pro Camera Shootout: Which is Better?