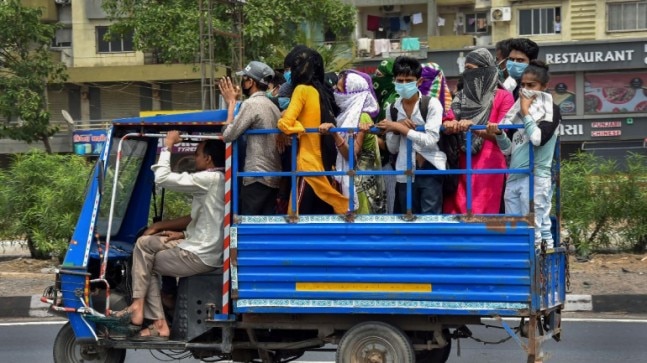 As many as 50,000 migrant workers returned to Bihar a day before the nationwide lockdown kicked in on March 25.

Bihar has stepped up efforts to screen all of them.

State health department officials admitted that the massive inflow of workers has made it difficult to quarantine each of them. This does pose a challenge of community spread if anyone of them turns out to be infected by the deadly novel coronavirus.

Some of the migrant workers have come disregarding advice of self-quarantine.

The Bihar government has purchased 15,000 thermal screening kits and massive efforts are being made to screen all these migrants.

They have also been told to stay at village schools or panchayat bhawans, that have been made to function as self-quarantine centres.

As of now, 909 persons across Bihar have been placed under isolation.

Maximum number of quarantined people is in Gopalganj district where 172 persons have been placed under observation followed by 100 in Patna.

Having already registered a novel coronavirues death, along with six positive cases, the Bihar government is not taking any chances.

Earlier, 38-year-old Md Saif from Munger, with a recent travel history of Qatar, died on Saturday after contracting the virus.

Later, two persons, a family member of Saif and a neighbourhood teenager, have been found positive. A total number of 59 persons, who were in close contact with the deceased, have been quarantined.

The state government has designated Nalanda Medical College and Hospital (NMCH) at Patna as the nodal hospital.

It will now attend only suspected and positive cases of Covid-19.

The state government has already decided to pay one month additional salary to doctors and other health department employees, who are working overtime to help the state contain the crisis.

The Nitish government is also giving free one month rations to 1.68 crore ration card holders in addition to the bank transfer of Rs 1,000 to each of them.

The government will also pay Rs 1,000 each to about 13 lakh registered construction workers. Besides, 87 lakh pensioners will also get three months pension in advance.

A good number of villagers across the state are coordinating with panchayat and block officials to convert schools and panchayat buildings into isolation wards.

BIHAR HAS GEARED UP TO COME TO TERMS WITH MASSIVE CRISIS

It is not only the migrants returning home who are posing a challenge. Managing the 1,751-km-long and porous Indo-Nepal borders, and keeping a tab on the 6,364 villages bordering the neighbouring country with numerous open transit points, is proving to be a difficult job.

Meanwhile, the state police department has seized as many as 531 vehicles, lodged 41 FIRs and even arrested nine persons for violating the nationwide lockdown.

Aware of crucial supply chain of the essential items can be disrupted by the suspension of vehicular movement, the Nitish Government has exempted food production and processing and packaging industries from the lockdown.

Bihar receives rice from West Bengal, pulses from Katni and Satna in Madhya Pradesh, and mustard oil from Rajasthan.

Now, state police have been ordered not to stop trucks carrying foodgrains to Bihar.