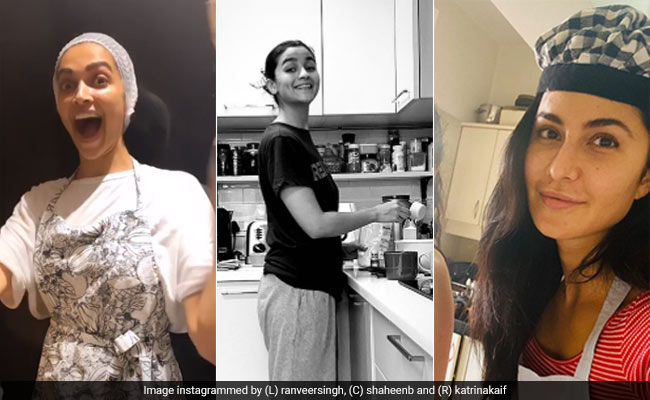 Deepika, Alia and Katrina in their respective kitchens (courtesy Instagram)

Quarantine cooking got Bollywood celebs to brush up their culinary skills with Instagram as their new scrapbook. From Deepika Padukone preparing a four-course Thai meal to Alia Bhatt just learning to cook, every celebrity kitchen is getting a new flavour every day, making fans drool on Instagram. While some celebs can consider being chefs as alternate career options, there are those like Katrina Kaif and Rahul Bose, who are embracing their failures in the kitchen with a sporting spirit. We’ve curated some of the fun-filled, delicious looking cooking posts from celebrity chef diaries. Get ready to drool, you can thank us later.

Deepika Padukone and Ranveer Singh went on a date to their dining room. And Deepika was in complete chef mode. Ranveer, who is always busy with wife appreciation posts, shared glimpses of Deepika’s hard-work on his Instagram stories. At the end of all the cooking-shooking, Deepika plated out Thai delicacies like Chopped Thai Salad with Sesame Garlic Dressing, Tom Yum soup and Thai Green Curry. Deepika and Ranveer ended their date on a sweet note – they baked the dessert cake together!

Alia Bhatt, who is “learning something new” everyday, shared photos of delicious looking Banana Bread baked by her and accompanied it with a photo of a chocolate cake made by sister Shaheen. Alia also has cooking videos shared on her YouTube channel, in which she’s just learning the basics. She did a good job here: “Stayed home and baked a little with the sister. Shaheen made the real chocolate cake and I made the grain free paleo banana bread.”

Guys, don’t laugh at Katrina Kaif’s meal, okay? At least, she tried! Katrina shared a video of a meal prepared by her and her sister Isabelle but couldn’t tell what it was actually. But she was sure to have the chef’s hat on. “We’re not sure what it is either… we’ll let you know when we do,” she wrote. LOL.

Sit Back And Enjoy. Sonam Kapoor Is On A Cooking Spree:

Sonam Kapoor, who is currently in Delhi with Anand Ahuja and his parents, has been preparing healthy and yummy meals since the beginning of the lockdown. Sonam is also on a baking spree, which prompted her mother-in-law to worry about “weight gain” because “everybody is loving them so much!”

Shilpa Shetty and her son Viaan, 7, make an adorable baking duo. From baking healthy cakes to preparing lunch with home grown organic veggies, Viaan is Shilpa’s partner in all. “Spending time with Viaan usually entails a baking/cooking session once a week,” Shilpa captioned her baking video while for another video of the mother-son duo plucking vegetables from the garden, she wrote: “The Baingan Ka Bharta we had for lunch was delicious.”

Whenever Karisma Kapoor’s craving some chocolatey goodness, she’s whipping up a cake in her kitchen. Karisma’s baking not only for her family but also for her house staff members. “What’s your go to comfort food? Mine is a big piece of chocolate cake (made by me),” she captioned one of her posts.

Malaika Arora inspired those lazy bums to get up and cook a Malabari Veg Stew in the lockdown. Malaika said she loves cooking but with her busy schedule she hardly gets the time. And now that she has time, “I thought of utilising this time in a constructive and healthy way by cooking some sumptuous and delicious ‘Malabari Veg Stew for the soul’.” Malaika also baked sweet something for Arjun Kapoor.

Preity Is A Masala Dosa Girl:

Preity Zinta, who is a complete foodie, is in Los Angeles with her family. Meanwhile, she’s brushing up her culinary skills under the supervision of her mother. She recently perfected her hands at making Masala Dosa and was delighted: “It’s really nice to hang with mom and learn recipes of some of my fave dishes.”

When Shibani Dandekar’s Trial And Error Yielded The Healthiest Cookies:

Shibani Dandekar put on the baker’s hat and the apron to try her hand at baking some healthy cookies. While Farhan Akhtar proclaimed her as a a bona-fide baker, we think she’s the cutest one in town! However, Shibani only succeeded at her feat after a trial and error session, which she described like this: “I did it finally after 2 batches of utter c**p, I made some good ones. I am a baker.”

Ananya Is The Perfect (Not) Kitchen Assistant For Her Sister:

Ananya Panday and her sister Rysa felt like some cookies on Sunday. Unable to step out of the house, they baked some chocolate delights. Umm… correction. It wasn’t “they” who baked because: “I mean Rysa Panday baked cookies – I just danced around the kitchen and ate chocolate chips.”

Spice It Up With Shruti Haasan:

Shruti Haasan will tell you how to spice up even a simple bhindi sabji with that extra zing. Are you also someone who craves midnight ramen bowls? Shruti will fix that for you too. Oh, and don’t miss her detailed recipe of a coffee-choco mousse. Looks so yum!

Craving for some “desi pizza” and orange cake? Head to Neena Gupta’s home in Mukteshwar. Yes, that’s where she is staying with her husband during quarantine. Neena Gupta, known for being her absolute honest self on Instagram, shared her recipe of turning a roti into a sizzling pizza and we can’t wait to try it!

Encouraged by her Instafam, Shefali Shah has been sharing detailed videos of her dinner recipes on her Instagram stories every day. Shefali is a bona-fide cook, who loves to experiment with her recipes and treat her family. Shefali Shah’s dinner menu is a wide range of delicacies ranging from Mushroom Egg Curries and Lentil Soup to Pasta and Tortillas and everything in between. We are not drooling, you are drooling!

When Tisca Chopra Made Us Look Bad With Her Roti-Making Skills:

Tisca Chopra, during the initial days of the lockdown, had said: “My domestic goddess mask is beginning to crack” but she still managed to prepare “Kacchi gobhi ke parathe with dahi for lunch and sautedd cabbage and Maggi for dinner.” Later, she participated in this roti-making challenge and made us all look bad.

Yami Gautam, who is from Himachal Pradesh, has been missing home-cooked food and preparing pahaari dishes like Rajma and Chhole for her meals. “With my entire family quarantined at different locations, we can still be connected through thoughts and gestures,” she wrote. Oh, Yami is also an expert at making gluten free bread now.

Life Is Better With Cream, Eggs And Cheese Kalki Koechlin:

New mom Kalki Koechlin, who welcomed a daughter named Sappho in February, exceeded expectations while baking a veg quiche. She shared her trick in the caption: “Broccoli can be yum if you drown it in cream, eggs and cheese.” Meanwhile, her partner Guy Hershberg also helps her with kitchen duties.

Esha Deol Is Busy Cooking For Her Daughters:

Esha Deol, who has also authored a cook book named Amma Mia, has been “happily cooking in the kitchen.” Esha Deol, who is parents to two daughters, wrote Amma Mia to help fellow mothers with cooking for their kids.

On his sister’s birthday, Kartik Aaryan wanted to treat her to a small cake, which eventually turned out to be an oversized cookie. But it’s the thought that counts and it was pretty sweet. “Celebrating Kittu’s b’day together after 7 years. Chota cake banane gaya, bada biscuit ban gaya,” he wrote. LOL.

Vicky Kaushal, whose mom makes him clean the ceiling fans, found chhoti khushiyan in flipping the omelette like a pro. Check out his grin and his post, which was captioned this way: “Make way for the latest entrant in the elite club of The Omelette Flippers.”

Diljit Dosanjh, who announced his penchant for cooking with a photo of “Paneer Do Pyaaza (literally paneer and 2 pieces of onions), took a serious turn and landed in the kitchen. Every other day, he shares cooking videos on his Instagram stories and his ROFL commentary adds the special tadka to the true blue Punjabi delicacies he prepares.

How Many Of You Would Eat This Roti?

Meanwhile, there’s one celebrity who was brave enough to begin cooking for his own self. In an Instagram post, Rahul Bose shared he cannot cook “anything” and hence decided to start with what he thinks is the most difficult thing – rotis. Here’s how his first cooking venture turned out to be. Aww.

BRB, running to the kitchen with all the cooking inspiration. Yes, Rahul Bose and Katrina Kaif included.

Sonam Kapoor updates her fans as an earthquake of 4.6 magnitude...

“I haven’t passed a single audition in my life”, says actress...