Home Top Stories I felt bad when I was left out of Indian team in... 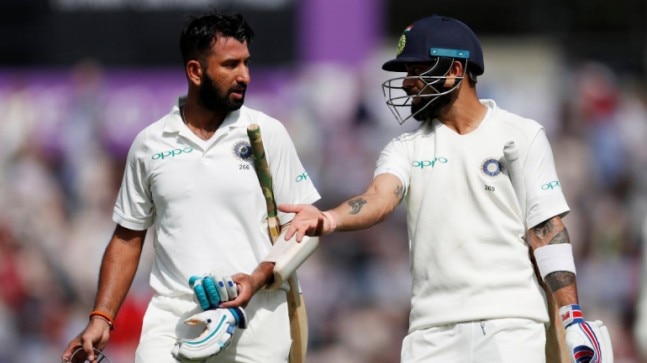 Cheteshwar Pujar was controversially dropped from the Indian team for the first Test against England on their 2015 tour due to his inconsistent form and inability to score runs at a good rate.

India batsman Cheteshwar Pujara opened up on the disappointment of being dropped from the Test team in the 2014-15 season for batting too slowly on the latest episode of India Today Inspiration on Saturday.

It was the final Test of the 2014-15 Border-Gavaskar Test series, and captain Virat Kohli made the bold decision of dropping Cheteshwar Pujara. He cited Pujara’s inability to increase the scoring rate at No. 3, thereby slowing down the innings, as the reason.

Then again in 2016, Pujara was ignored for the West Indies Tests as Kohli wanted to play five bowlers and once again pin-pointed the Saurashtra batsman’s inability to score at a fair clip as one of the reasons.

All this while Pujara waited in the wings for an opportunity to get back and prove his worth. Which he did in the 2016-17 home season and made significant contributions against New Zealand, England, Bangladesh and Australia. The 32-year-old hasn’t looked back since.

“It wasn’t easy. I am a human being and there’s no doubt that when I was left out of the Indian team I felt bad. But I did understand that what I can control is to focus on my game. I knew they’ll be times when I’ll get my opportunity back. So I had to be prepared for that. I just focussed on that and I didn’t get bogged down because I was left out.

“I worked hard on my game, I knew what will come if I get an opportunity. So I started working on those lines and when my opportunity came, I was very confident. I knew that since I had played in 2014 in England, I’d played a lot of county matches. So I knew what will happen in some of the stadiums. The biggest advantage was I was familiar with the conditions and I just trusted myself.

“I backed myself that I can play well although the 2014 tour wasn’t great. But this time I was very confident since county cricket had taught me many things. So when I played at Trent Bridge I was very confident and after that things went well for me in the 3rd and 4th Test matches,” Pujara said on Inspiration.

Since 2017, Pujara has featured in 32 Tests and averaged over 67, 38 and 46 in the last three years and smashed 8 hundreds during this time.

His record-breaking feat in the 2018-19 Border-Gavaskar series in Australia led to India winning their first Test series in the country with Pujara emerging as the top-scorer with 521 runs at an average of over 74 with three hundreds and a fifty.