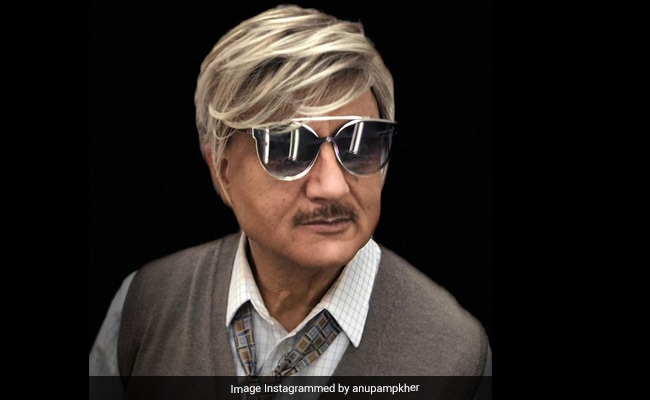 Anupam Kher, on Wednesday, took away our quarantine blues with a hilarious set of pictures. The veteran actor, who is currently in home isolation, cracked up Instagram with a set of pictures of himself in different wigs. Sharing the goofy pictures, Anupam Kher accompanied it with an equally hilarious caption, “I have a feeling my hair may grow during this self quarantine and lockdown time. If that happens, which style do you think will fit me the most?” He also added, “Please don’t laugh, it is a serious matter. Waise toh sabhi style acche lag rahe hai, lekin phir bhi (Anyway each style looks good on me, but still).” He also added “Self quarantine ke side effects“and “Kuch bhi ho sakta hai (Anything can happen)” to the hastags on his post. Take a look at these hilarious set of pictures:

Anupam Kher, who returned from New York recently, had the sweetest Instagram exchange with neighbor Anil Kapoor, on Friday. Being in home quarantine, Anupam Kher shared a video on his Instagram profile and wrote, “In normal circumstances when I return from abroad before coming to my house I go to my neighbour and best friend Anil Kapoor’s house. But things are different nowadays. It is important to observe social distance. Hopefully he will come out to show me his face soon.” In an hour, Anil Kapoor treated his Instafam to a video featuring a fun-filled banter between him and Anupam Kher. What stole the show was Anil Kapoor singing Tere Ghar Ke Saamne Ek Ghar Banaunga from the 1963 film Tere Ghar Ke Samne for Anupam Kher. Anil Kapoor shared the video on his Instagram profile and wrote, “AK meets AK. Keeping up with traditions but from a distance.”:

On Monday, Anupam Kher gave us a glimpse of “positive side effects of self quarantine” and that includes Karaoke. Anupam Kher, 65, shared the video of him singing Jeena isi Ka Naam Hai from the 1959 film Anari. Take a look:

On the professional front, Anupam Kher, was last seen in the films The Accidental Prime Minister and One Day: Justice Delivered.

#9baje9minute: Gauri Khan shares a video of AbRam lighting diyas for nine minutes and it is simply too sweet for words – Times of...

#9baje9minute: Ranveer Singh pledges his support in combating COVID-19 by lighting a candle with wifey Deepika Padukone – Times of India ►