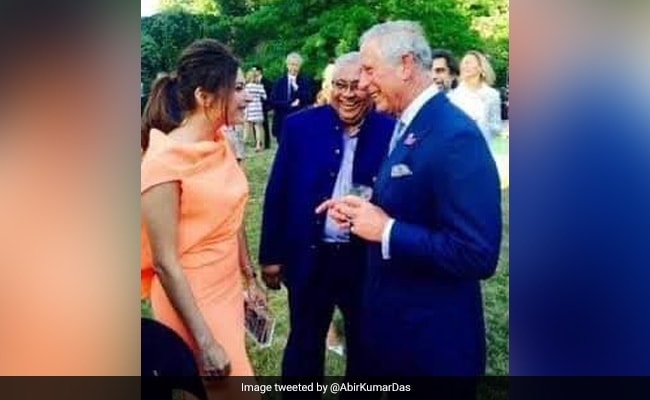 The Internet found a way to make singer Kanika Kapoor and Prince Charles, both of who tested positive for coronavirus recently, trend together. Hours after the Prince of Wales’ coronavirus diagnosis was revealed, photos of Kanika Kapoor greeting Prince Charles at past events were dug out on Twitter. Ms Kapoor returned from the UK earlier this month, which made some netizens speculate that she may have met the British Royal recently and that he may have contracted the virus from her. But a section of the Internet did a fact-check and pointed out that the photos are from an old event. However, Twitter is currently flooded with the viral photos, and netizens just can’t stop asking: “Who gave it to who?”

Take a look at some of the tweets below:

Now we know how #PrinceCharles got #Coronavirus. Yes, that’s #KanikaKapoor in the image.

Kanika Kapoor is surely taking the world by storm.

BTW – she has been detected 3rd time +ve today.#IndiaFightsCoronapic.twitter.com/mOruYNeRh9

Prince Charles and Kanika Kapoor.
Two coronavirus +ve cases
When did they met?#CoronaViruspic.twitter.com/P2evVXv1Ts

On Wednesday, the Buckingham Palace released a statement saying Prince Charles of Britain, the eldest son and heir to Queen Elizabeth II, is showing mild symptoms of the new coronavirus but “otherwise remains in good health”. However, Prince Charles’ wife Camilla has tested negative. The 71-year-old Prince Charles is currently in self-isolation in Scotland with this wife.

Meanwhile, Kanika Kapoor has deleted her Instagram post in which she revealed her coronavirus diagnosis last week. On Wednesday, news agency IANS reported that the singer tested positive for the third time. Ms Kapoor is undergoing treatment at the Sanjay Gandhi Post Graduate Institute of Medical Sciences (SGPGIMS) in Lucknow. Ms Kapoor flew to Mumbai from London on March 9 and travelled to Lucknow two days later. She found herself in the midst of a controversy for not going into quarantine following her travel and instead, attending a high-profile dinner in Lucknow, which also had several politicians on the guest-list and was reportedly attended by as many as 200 guests.

Bolly Buzz: Salman Khan scared amid Coronavirus outbreak, #9baje9minutes with B-town and Vicky Kaushal-Katrina Kaif to pair up for a film – Times of...