Home Entertainment Pooja Bhatt’s Pic Is Proof That She’s “Been In Hot Water Since... 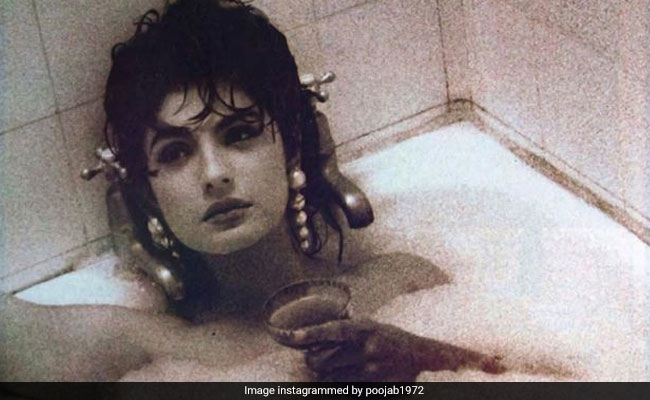 Actress-filmmaker Pooja Bhatt, in a sassy kind of a mood on Wednesday, shared a priceless throwback from her younger days but it’s her caption that steals the show. Pooja Bhatt, who stepped into Bollywood with her acting debut in 1989’s Daddy, directed by her filmmaker father Mahesh Bhatt, added a pun around the idiom “in hot water” (which means in trouble) and wrote about her mantra behind dealing with criticism. Her black and white throwback photo was accompanied by this caption: “Criticism? Doesn’t faze me! I’ve been in hot water since the early 90s.” In the photo, Pooja can be seen posing for a shot while resting in a bathtub with a drink in her hand. Pooja Bhatt is the eldest of Mr Bhatt’s children – actress Alia, author Shaheen and Rahul Bhatt are her younger siblings.

Pooja Bhatt is best known for her roles in films such as Sadak, Zakhm, Junoon, Chaahat, Dil Hai Ki Manta Nahin, Prem Deewane and Kabhi Na Kabhi, all nineties’ films. She featured in the 2001 film Everybody Says I’m Fine! and appeared in 2009’s Sanam Teri Kasam after a hiatus of eight years, after which she gradually disappeared from the acting scenario. Pooja Bhatt made her debut as a director with 2003 film Paap and went on to helm films such as Holiday, Dhokha and Jism 2. A few years ago, Pooja Bhatt opened up about her battle with alcoholism and revealed she quit drinking on Christmas of 2016.

Pooja Bhatt’s upcoming acting project is Sadak 2, which is a spin-off of sorts of her 1991 hit film Sadak. Mahesh Bhatt returns to the director’s chair for Sadak 2, which also stars Alia Bhatt and Aditya Roy Kapur, along with the original cast of Pooja Bhatt and Sanjay Dutt.

Sadak 2 will release on Disney+Hotstar on July 10.