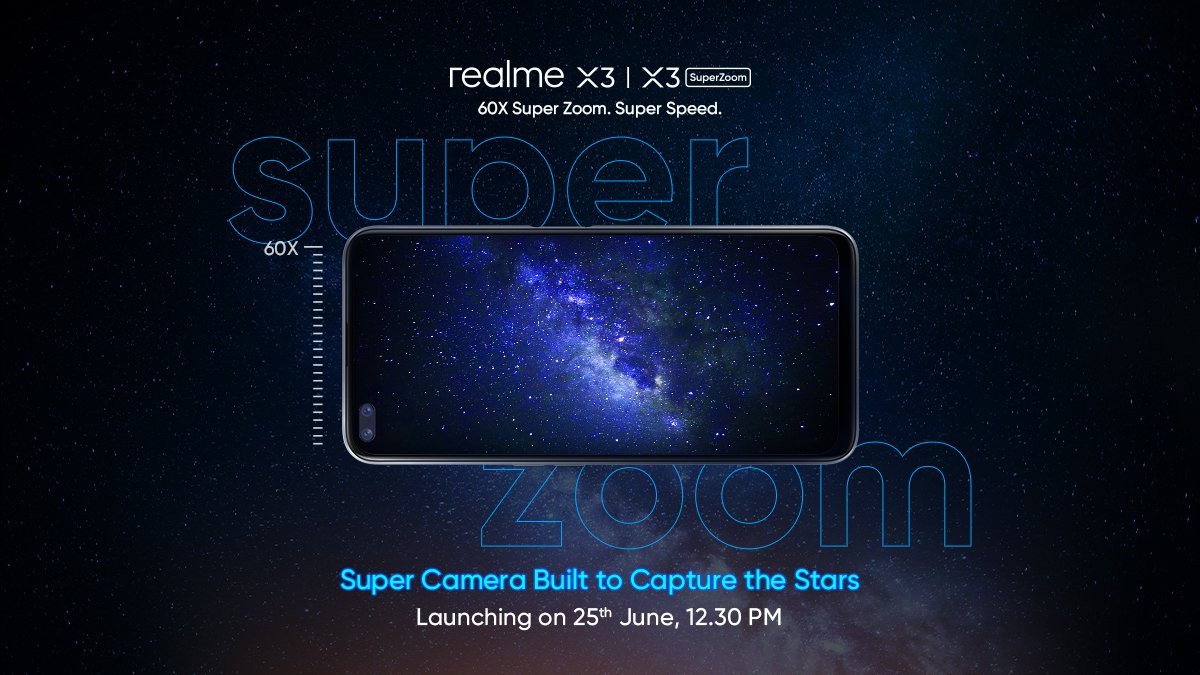 Realme X3 and Realme X3 SuperZoom are set to launch in India on June 25, Realme India CEO Madhav Sheth revealed through a tweet posted on Wednesday. Realme also separately sent a media invite to announce the new launch. Up until now, Realme didn’t make any official announcements regarding the Realme X3 series in the country. The company, however, did launch the Realme X3 SuperZoom in Europe last month with 5x optical zoom and 120Hz display. The phone is likely to debut in India with a distinct list of specifications over what arrived in the European market earlier.

The Realme X3 price in India is yet to be announced. However, considering the name of the smartphone, it is likely to be the successor to the Realme X2 that was launched last year and is available at Rs. 17,999 for the 4GB + 64GB configuration. The Realme X3, thus, seems to come in the Rs. 20,000 price segment. In contrast, the Realme X3 SuperZoom price in India is expected to be somewhere around its price in Europe that comes at EUR 499 (roughly Rs. 42,900) for the 12GB + 256GB model. The company also has an 8GB + 128GB option, but its pricing is yet to be revealed.

The Realme X3 and Realme X3 SuperZoom India launch will take place at 12:30pm on June 25. The launch will be hosted via an online video that will be accessible through Realme’s Facebook, Twitter, and YouTube accounts.

Realme hasn’t yet announced the specifications of the Realme X3. Nevertheless, certification sites including China’s TENAA recently indicated some details. The phone is expected to have a 6.57-inch full-HD+ (1,080×2,400 pixels) display and include an octa-core SoC, paired with up to 12GB of RAM and up to 256GB of onboard storage. It is also likely to have a 4,100mAh battery and come with a quad rear camera setup, with a 48-megapixel primary sensor and an 8-megapixel secondary sensor. The Realme X3 is also expected to have a dual selfie camera setup at the front, with a 16-megapixel primary sensor and a 2-megapixel secondary sensor. The phone would offer a hole-punch display design and run Android 10 out-of-the-box.

The Realme X3 SuperZoom was unveiled in Europe with specifications such as a 6.6-inch full-HD+ (1,080×2,400 pixels) display, Qualcomm Snapdragon 855+ SoC, up to 12GB of RAM, and up to 256GB of onboard storage. There is a quad rear camera setup as well onboard that includes a 64-megapixel primary sensor and an 8-megapixel secondary sensor with a periscope-style lens setup to enable 5x optical zoom and 60x digital zoom. However, Realme India Chief Marketing Officer Francis Wang recently suggested that there could be some changes in the specifications of the India model over what’s available in Europe.

Is Redmi Note 9 Pro Max the best affordable camera phone in India? We discussed this on Orbital, our weekly technology podcast, which you can subscribe to via Apple Podcasts or RSS, download the episode, or just hit the play button below.