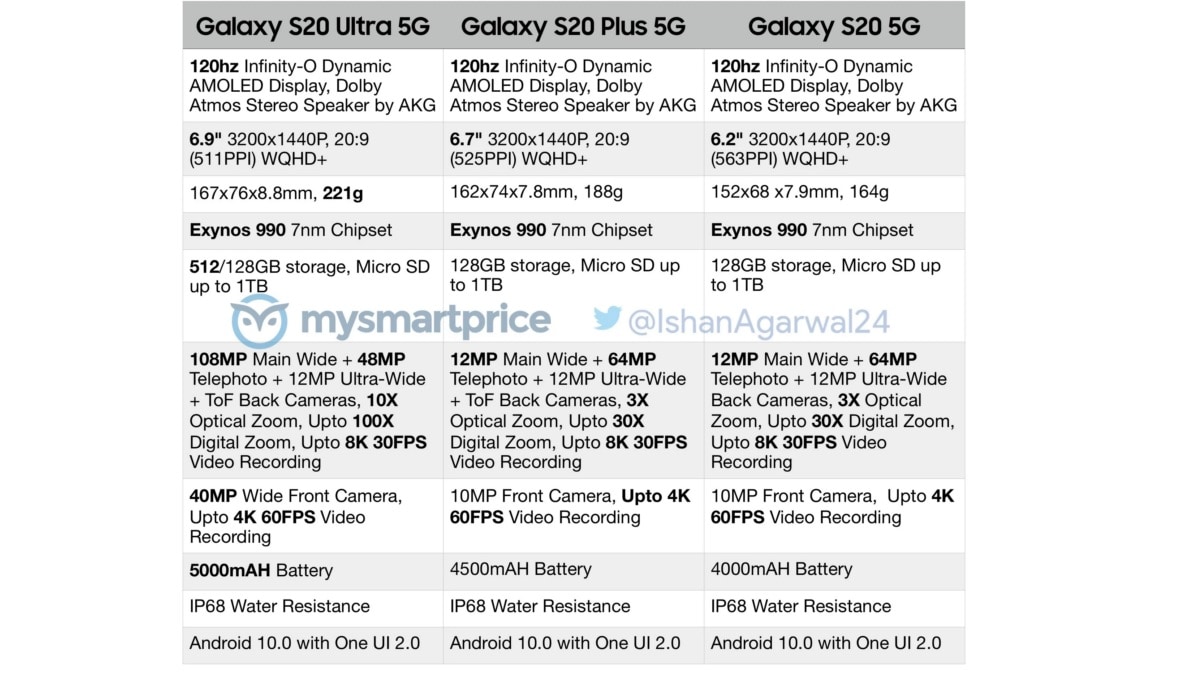 Samsung Galaxy S20 leaks have been coming in from all directions lately. After renders and camera details made their way online, complete specifications of all three upcoming flagship phones have allegedly been leaked. As per a new report, all three Galaxy S20 series phones – the Galaxy S20, Galaxy S20+, and Galaxy S20 Ultra – will come equipped with triple rear cameras alongside ToF sensors. Camera capabilities include 8K 30fps video capture and up to 10x optical zoom. Another notable feature will be a 120Hz refresh rate for the Dynamic AMOLED display of Galaxy S20 series phones.

Samsung Galaxy S20 Ultra will succeed the Samsung Galaxy S10+, and as per the latest leak, it will be a monster in terms of the hardware. It is said to pack a 6.9-inch WQHD+ (1440 x 3200 pixels) Dynamic AMOLED Infinity-O display with a 120Hz refresh rate. The camera department is where the Galaxy S20 Ultra stands above its siblings.

It will reportedly pack a 108-megapixel main camera that is said to include a custom in-house ISOCELL sensor. It will come equipped with a 12-megapixel ultra-wide angle camera and a 48-megapixel telephoto shooter with 10x optical zoom support, and an impressive 100x digital zoom output. On the front will be 40-megapixel snapper with support for 4K 60fps video capture. It is claimed to pack a 5,000mAh battery, but fast charging wattage is not known yet.

Talking about cameras, the Galaxy S20 and S20+ will both pack a 12-megapixel main camera, a 12-megapixel ultra-wide angle camera, and a 64-megapixel telephoto shooter (most likely backed by the second generation ISOCELL GW2 sensor). Camera features will include 3x optical zoom, 30x digital zoom, and 8K video capture at 30fps. On the front sits a 10-megapixel selfie snapper with 4K 40fps video capture support.

Samsung Galaxy A71 Comes to India, WhatsApp-Google, and More News This Week

RBI alone can not contain inflation: Rangarajan – Times of India