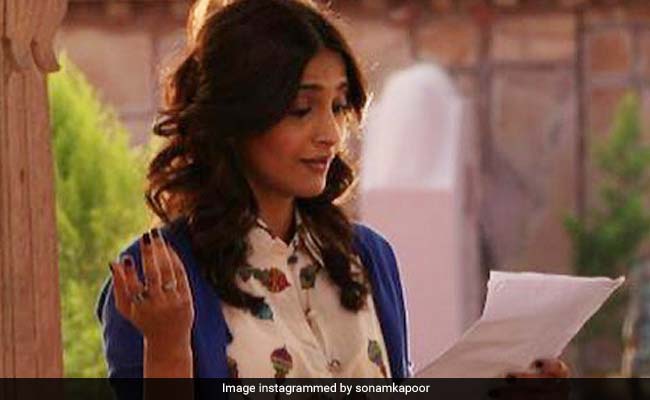 Sonam Kapoor is missing being on film sets and “rehearsing” her lines and her latest post on Instagram clearly reflects it. The actress, in a throwback state of mind, shared a BTS picture from the sets of her 2014 film Khoobsurat  and said that she “can’t wait” to “being on set again.” Sonam co-starred with Ratna Pathak, Aditi Rao Hydari and Pakistani actor Fawad Khan in the film, directed by Shashanka Ghosh. In the picture, Sonam, dressed in a printed kurti and blue cardigan, can be seen rehearsing her lines for the shoot. “Can’t wait to be rehearsing lines, acting and being on set again… miss it so damn much,” wrote Sonam. The Maharashtra government has given permission to film and television projects to resume work in compliance with strict guidelines set by them from next month. However, filmmakers are trying to figure out how to resume shoots while also complying with the restrictions.

In her post, Sonam also wrote about the character she played in the 2014 film: “This still is from Khoobsurat. I’ve never felt as joyful playing a character. Mili, I love you.” In Khoobsurat, Sonam Kapoor played the role of a young, cheerful physiotherapist named Mili, who falls in love with a prince (played by Fawad Khan) while working for his royal family. Check out Sonam Kapoor’s post here: