Home Entertainment The Platform Review: This Grim Film Is A Savage Punch In... 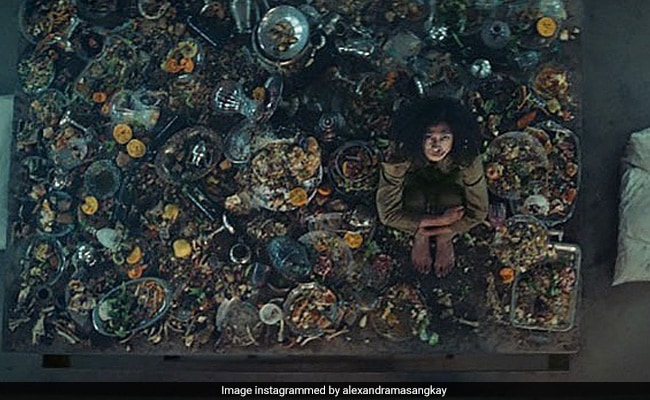 The Platform Review: A promotional poster of the film. (courtesy alexandramasangkay )

At once harrowing and sobering, The Platform, Spanish director Galder Gaztelu-Urrutia’s stylized debut feature, is a spot-on and timely cautionary tale that points to the toxic repercussions of living in a world overrun by selfishness, greed and appalling inequities.

A bleak penitentiary where natural light and fresh air have no way of sneaking in symbolizes our fraught times in which the socially and economically privileged, driven by barefaced covetousness, have no qualms in running the already downtrodden further into the ground. The nightmarish analogies that the film draws may seem rather obvious, considering where the human race is at this point in its history, but The Platform still manages to startle us with its stark, brutal revelations of the noxious.

A layered screenplay (by David Desolo and Pedro Rivero), a clutch of powerful performances (with lead actor Ivan Massague leading the way with a brilliantly nuanced turn) and terrific production design (undoubtedly the film’s firmest asset) combine to make the action-packed horror parable, now streaming on Netflix, a hypnotic affair.

The Platform blends heightened realism with wickedly and weirdly satirical vigour to bring its audience face to face with the pettiness of our souls – and the misfortunes that are heaped upon those who have to make do with crumbs thrown at them by the select few who have access to the levers of power. In the film’s rooted-in-reality speculative fiction, food is the currency that separates the haves from the have-nots.

The Platform is set in a stifling concrete barrel-like prison tower called “the hole”, where the levels are stacked one upon another with the middle being hollowed out to provide a passage for a large rectangular platform that is used to relay food from the topmost level – numbered 1 – all the way down to the base.

Each level of this pit is meant for two inmates. The ones at the top are obviously the first to receive the vast food platter and they grab everything they can from the spread that halts at each level for only a few minutes. Those languishing in the lower depths have to survive on the leftovers, if there are any.

The film opens in a brightly lit kitchen where dishes are whipped by liveried chefs. It is from here that the culinary smorgasbord begins its descent, turning into a nauseating mess by the time it gets to the middle levels. That is where – Level 48, to be precise – we first meet Gerong (Massague), who is in this hellish prison with a book for company.

His cellmate is a much older man, Trimagasi (Zorion Eguileor), who has chosen the hole over a psychiatric facility after a television he hurled out the window killed an “illegal immigrant on a bicycle”. Illegal and an immigrant – what business did he have to be under his window, the man asks dismissively.

Hunger, Trimagasi says when the two men have plummeted to Level 171 a month later, “unleashes the mad man in us… it is better to eat than be eaten”. It takes Goreng a while to figure out the import of that ominous statement. By the time he does, a lot of blood, including his own, is shed.

Earlier, Gerong lets on that he has chosen a six-month term in this grey cell “to quit smoking and read Don Quixote”. But there is a bigger reward awaiting him at the end of the ordeal – an “accredited diploma” that could help him secure the sort of freedom he has never had in the world outside.

A prisoner stays on one level for only a month and wakes up on another level – whether it is higher or lower is sheer potluck – at the start of the next. So, someone on one of the top levels could wind up on Level 140 without having any say in the shift. The transfer happens after anesthetic gas renders an inmate unconscious.

But captivity – and Trimagasi’s provocations – push him into a course of action that he hopes will break the cycle of deprivation, hunger, murder and cannibalism. His struggles do not cease when Imoguiri (Antonia San Juan), the woman who interviewed him before he was admitted into this “pigsty”, becomes his cellmate on Level 33, a dachshund in tow. “More sausage than dog,” Goreng quips about the pooch.

The first spoken line that we hear in The Platform spells out does not fully prepare us for the world that we are about to enter: there are three types of people in the world, those at the top, those at the bottom, and those who fall, a voice on the soundtrack intones. As we begin to understand and encounter a lot more over the film’s 90-odd minutes, it becomes clear that the “administration” of this “Vertical Self-Management Centre” is seeking “spontaneous solidarity” among the prisoners. Doesn’t that sound eerily familiar?

Goreng dares to swim against the tide. “Change can never be spontaneous,” he says before he teams up with a black man, Baharat (Emilio Buale Coka), who becomes a victim of an obnoxiously racial act when he seeks a leg-up from Level 6 to 5. Their mission is to protect a panna cotta from being devoured on its way from the top to the lowest level. It is an act of rebellion fraught with risk but Goreng is incensed enough to do something about changing the way the machinery works out here.

The tower is never seen from the outside. Even from within, one cannot see the whole that “the hole” represents. This is a world where each individual is trapped in a cocoon and survival hinges on how low and desperate one can become in this ugly fight to stay afloat – and alive.

Among the principal characters is an Asian woman, Miharu (Alexandra Masangkay), who leaps from level to level in search of a child – who might actually be non-existent. This is the only quest in The Platform – apart from Goreng and Baharat’s daring plunge of faith – that has a ring of positivity about. But is it possible at all to stay uncorrupted in an environment that breeds mistrust?

Yes and no: the answer that The Platform comes up with in the climax is ambivalent. Just as well. The upheavals that the film depicts are too severe for anybody, even Goreng, to rise above without being tainted – and tamed into submission.

The Platform is a savage punch in the guts that approximates what a rapidly degrading world has been dishing out to us lately. In the downtime inflicted upon us by the Covid-19 outbreak, this grim film may not fill us with hope, but it definitely will arm us with a meaningful postulation as we ponder over what the future holds for mankind.

#9baje9minute: Gauri Khan shares a video of AbRam lighting diyas for nine minutes and it is simply too sweet for words – Times of...

#9baje9minute: Ranveer Singh pledges his support in combating COVID-19 by lighting a candle with wifey Deepika Padukone – Times of India ►