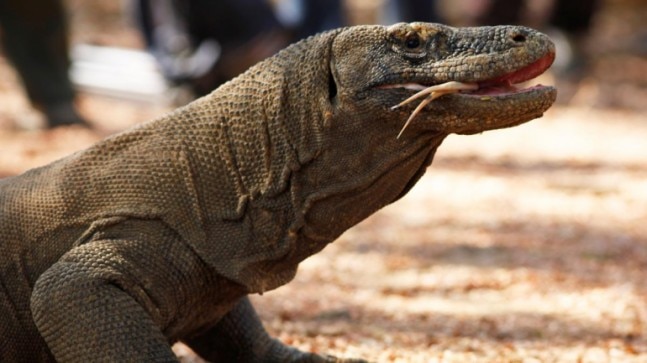 A wildlife show went horribly wrong when a komodo dragon destroyed expensive camera equipment while trying to have sex with it.

In your today’s dose of bizarre new, a filming of a BBC wildlife show went horribly wrong when a komodo dragon destroyed the camera while trying to have sex with it.

Yes, you read that right.

According to The Sun, while filming for Spy In The Wild II, the crew had installed their expensive camera equipment inside a dummy pig and a female dummy of komodo dragon to get a footage of the pack of giant lizards.

However, things turned ugly when one of the giant lizards decided to mate with the female lizard.

In an attempt of foreplay, the lizard sank its razor sharp claws into her back. But when the dummy didn’t respond to its actions, the lizard got frustrated and took it out on the dummy pig and the camera hidden inside it.

Executive producer John Downer told the daily, “With its massive claws this dragon starts raking at the skin of the ‘female’, and there’s nothing you can do because you can’t intervene. You just hope it will realise there’s something not right and it will stop.”

He added, “But then this pig, with all our equipment in it, was in the wrong place at the wrong time and they just annihilated it. It was breeding season and they’d been riled up by fighting over this female and testosterone gets the worst of us. They were like dinosaurs, it was just unbelievable, it was totally smashed to pieces.”

To add more to the whole bizarreness of the situation, Downer added, “The most surprising thing is when they’re having sex – they sound so much like humans.”

ALSO READ | Uber’s winning reply on viral Walking Buddy option has the Internet laughing hard. But is it true?

ABOUT US
TTV INDIA is your Top news Headlines, entertainment, and Products Reviews Platform. We provide you with the latest breaking news and Reviews straight from the Different News and entertainment industry.
Contact us: [email protected]ia.com
FOLLOW US
© copyright by Geekweber IT Solutions